×
Press Release
FOR IMMEDIATE RELEASE December 9, 2020
Forums.Group – The New Replacement for Yahoo Groups.
New service to provide a new home for Yahoo Groups that are due to be deleted on December 15, 2020.
Forums.Group is a new forum community platform designed to replace Yahoo Groups that has been a popular mailing list community system for more than 20 years and is closing down on December 15, leaving up to 10 million individual communities homeless. Forums.Group was created by Peter Walker, a British IT expert in Germany who has been using Yahoo Groups since 1999, to help out fellow group owners affected by the closing of Yahoo Groups. Forums.Group can be found at https://forums.group
After the loss of the online archives at Yahoo Groups in December 2019, there was a need for a new platform where existing Yahoo Groups could be fully restored complete with their message archives, files, photos and the members on a modern safe platform where members can discuss a wide variety of topics. The Forums.Group platform has been in development for almost a year and is now ready to go online on November 24, 2020.
With the announcement that Yahoo Groups will be closing down completely on December 15, 2020 – the start of the new forums.group platform is timely to allow existing groups to move to and even recover their archives on a modern phpBB forum system that has been modified to take account of the needs of people used to YahooGroups.

While there are a lot of platforms Yahoo group communities could move to without their archives, forums.group has developed a system capable of restoring their message archives that often go back over 20 years, from the MBox downloads offered by Yahoo last year and/or any archives members have kept in Microsoft Outlook, including posts made in the year after Yahoo Groups removed their archives.

The founder is Peter Walker who himself ran several YahooGroups and online forums and has used his technical knowledge to build a bridge between Yahoo Groups and phpBB forums.

Forums and mailing lists, like Yahoo Groups, have a major fundamental difference. Mailing lists are designed around members posting and receiving messages via email whereas forums are designed for members to post and read messages on the forum website, itself. It is often difficult for members to get used to going to a website to exchange their views, when they are used to doing so via email.

Forums.group have therefore worked on a custom-built interface to allow members to post and receive messages via email, that are then posted on the forum. This works in a similar way to Yahoo Groups, yet with minor enhancements to allow messages to be automatically sorted into the correct categories. Whereas Yahoo Groups was basically just one long list of thousands of messages, forums can have a wide range of separate sections (categories) for parallel discussions on various aspects. For example, in a group discussing cars, the YahooGroup would not differentiate between makes of cars so members would see messages about all makes. A forum however, can have separate sections for say Ford, General Motors, etc. and even subsections for say discussions on motors, chassis, interior, etc. This is what makes forums so much more flexible than Yahoo Groups could ever be.
The trick was to work out how to keep the posts separate when sent in via email. This is done by the way the subject line is formatted. The user just has to follow a specific way of formatting the subject line and then the messages can be correctly assigned.
Forums.group is now ready to take on potentially hundreds of Yahoo Groups that are seeking a new home, now that Yahoo Groups is finally closing down for good on December 15, 2020.
While Forums.Group is not free, it offers both free and premium level hosting, yet in both cases, there are reasonable setup charges and fees to migrate the members and data to the new platform.
For example, a typical Yahoo Group with 10,000 members and 50,000 posts can be migrated to forums.group for $189. Running costs are then financed through advertising or an ad-free premium level with a number of extra features is available for an addition $90 each year.

More information can be found on the website: https:/forums.group
About Yahoo Groups: Yahoo! Groups is a free-to-use system of electronic mailing lists offered by Yahoo!.
Prior to December 15, 2019, Yahoo! Groups was one of the world's largest collections of online discussion boards. It allowed members to subscribe to various groups, read subscribed discussions online, view and share photos, files and bookmarks within a group, access a group calendar, create polls for group members, and receive email notifications of new discussion topics. Some groups were simply announcement boards, to which only the group moderators could post, while others were discussion forums. Depending on each group's settings, membership could be open to everyone or only to invited and/or approved people.
On February 1, 2020, Yahoo! removed online access to discussions and all other features except simple membership management, essentially turning all groups into mailing lists, and on October 13, 2020 it announced that Yahoo Groups will shut down on December 15, 2020.
About Forums.group: Forums.Group was formed by Peter Walker after he heard about the removal of all archived content on Yahoo Groups. As he has been running several YahooGroups (Rife, Rifeforum, healthmod, etc.) himself, as well as an online forum, he knew both platforms very well. As a group owner, he was in touch with a number of other group owners and even had a special group (healthmod) just for group owners of health-related groups. Over a period of more than 20 years, Peter has made a name for himself as an advocate for free-speech and fair fact-based discussions as well as having a technical understanding of how both groups and forums worked. It is based in Cologne, Germany.
PDF Press Release
Images 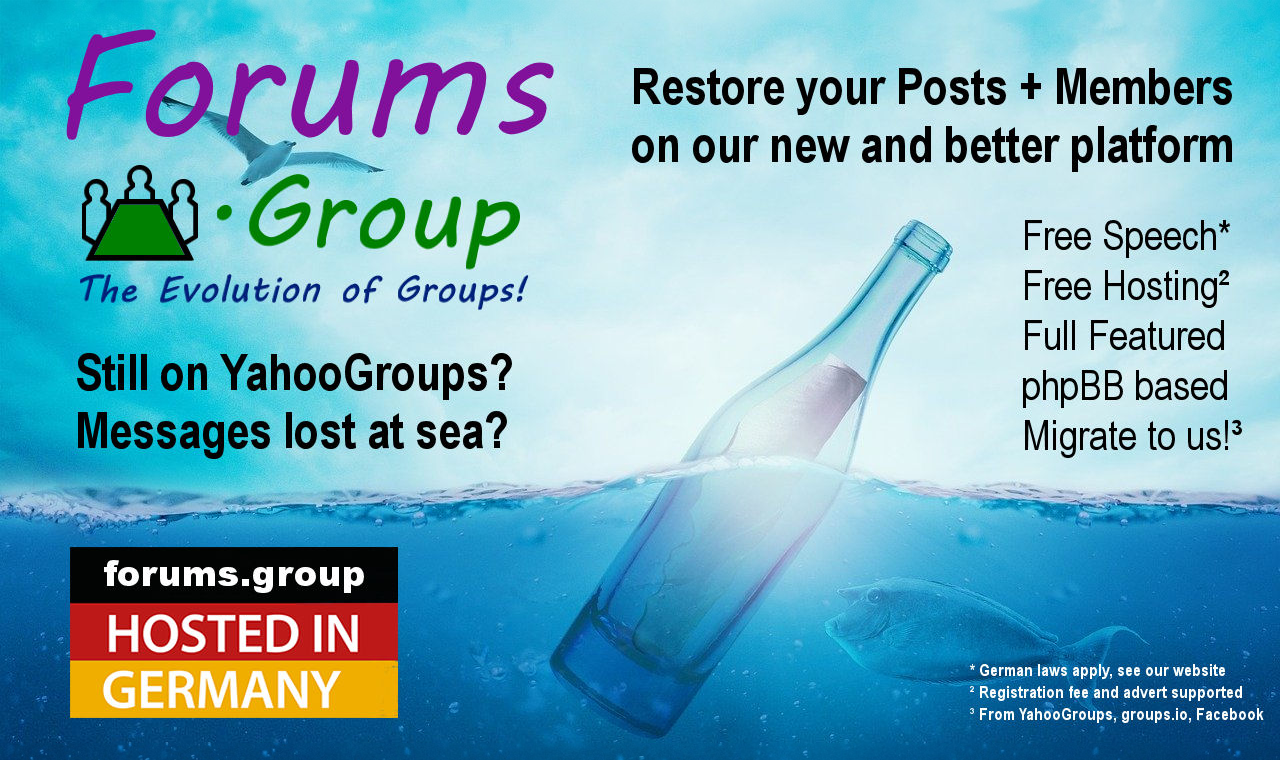 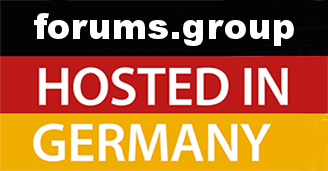 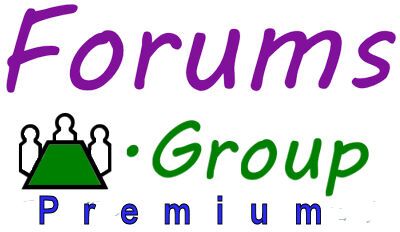 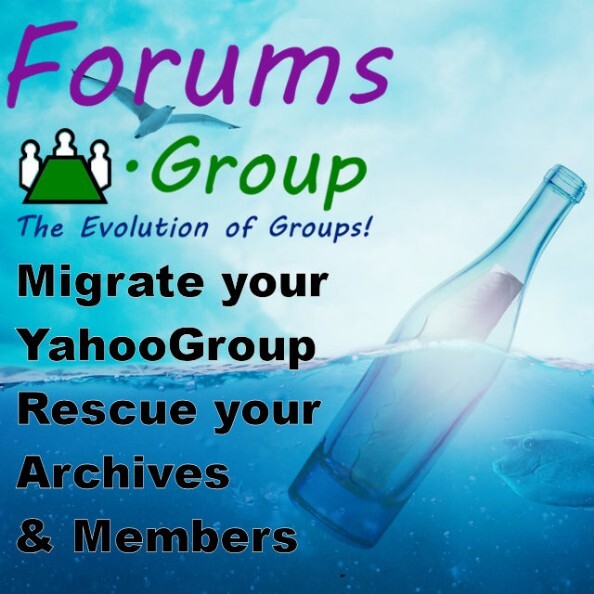 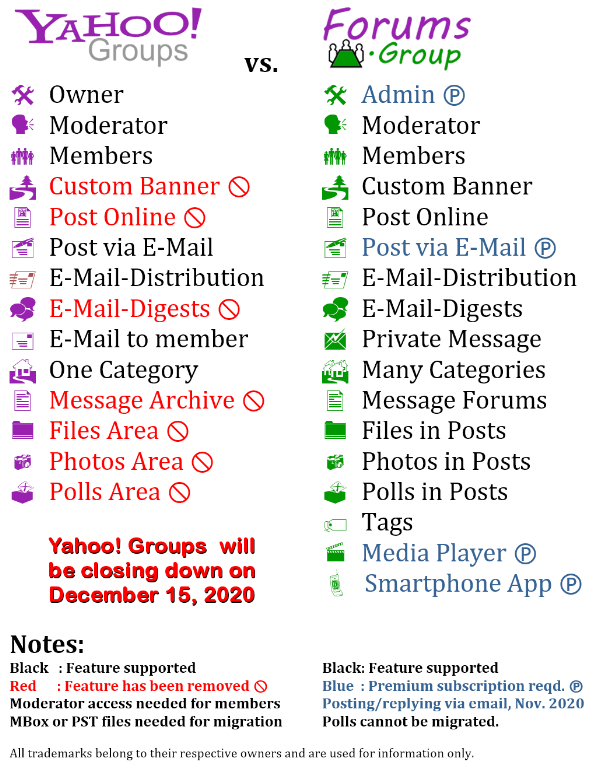